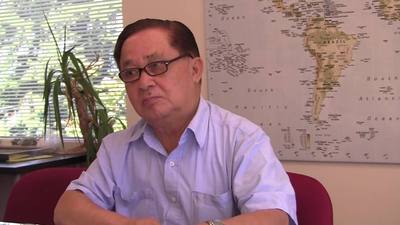 To begin this interview, Chanthavong discusses his education ranging from Laos to the United States, where he attended college. How he came to live in the United States, first as a refugee, is then discussed in conjunction with the positions he has held at IRCO and the subsequent founding of the Asian Family Center and the development of its programs. The role of the AFC and the needs assessment alongside funding is then discussed. Because coordination is huge part of AFC, Chanthavong explains his role within that sphere. There are challenges associated with working with such a diverse community; Chanthavong lays out what some of these challenges are and then talks a little bit about the Coalition of Communities of Color project that he helped to start. In closing, this interview highlights general projects from the AFC and Chanthavong's recommendations for the Center.

Hongsa Chanthavong was born in 1934, in Laos to Laotian parents who were born in the early 1900s. Because he comes from Laos, he self-identifies as Lao. Chanthavong attended school in Laos, in Vientiane, until coming to the United States in 1959 to study at the University of Miami. He came by himself to study in the School of Government of Political Science on a scholarship granted by the U.S. government. After his graduation in 1964, he began working for the State Department as an escort interpreter, but after three months, he returned to Laos. There, he worked for the government when in 1975 he was captured by communists and came as a refugee to the United States in 1983 with his wife and children. He began his career at IRCO in 1984 as a business specialist with the Economic Development Project. He moved from that position to resource specialist to director of the International Language Bank, and then he set up the Asian Family Center, becoming the center coordinator in 1994. He now works as the community organizer of the Diversity and Civic Leadership Project and as a business development specialist.