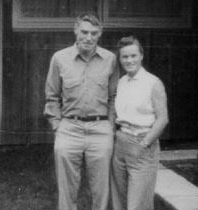 Jean Rothacher (Jack Rothacher’s widow) and Ted Dyrness (a family friend and co-worker with Jack in the Pacific Northwest Research Station of the US Forest Service) carried out this oral history with Max Geier on Aug 29, 1997. Dyrness participated to help jog Rothacher’s memory. She describes her early encounters with Jack, their getting together, and their moves from one Forest Service operation to another until, in 1957, they arrived at a home on Blue River Ranger Station compound, where Jack was stationed as an early leader of watershed research at the Andrews Forest. She describes encountering many of the early Forest Service researchers who worked at the experimental forest. This was a crucial time in the history of relations between the research and land manager communities. The Blue River Ranger District was just getting up and running, and the Rothachers became friends with Mike Kerrick (who would later become Supervisor of the Willamette National Forest) and his wife. This relationship helped bridge the science-land manager cultures. She also says a little about early research staff on the watershed project at that time, such as Jerry Franklin, Dick Fredriksen, Ross Mersereau, and others. She describes spending a week at the Carpenter Mountain fire lookout, which was a “high point.”

The transcript ends approximately 17 minutes into the audio recording. The entire oral history (generally of poor audio quality) continues to 1:58 featuring conversation between Rothacher and Dyrness and with some comments and questions from Geier. Dyrness describes work and social interactions with Jean and Jack. Jean Rothacher says she did not have much knowledge of Jack’s work. Geier asks about interactions between the research community and the local community; the Andrews Forest staff was quite small and interactions with local residents were limited.