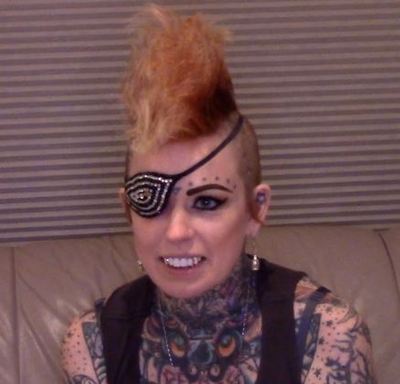 Rachael Reckless introduces herself as a pinup model, a strip club stripper, a strip club bartender, a Burlesque performer, and costume designer. She defines Burlesque as telling a story or portraying an emotion through the art of striptease. In describing the difference between stripping in a strip club and Burlesque stripping, she describes strip club stripping as being more involved with customers and selling lap dances or getting customers to buy your drinks. In strip clubs, you make money on the drinks that you have bought for you. In Burlesque, Rachael says, it’s just about the performance. Rachael describes the style of Burlesque that she does as punk rock the satanic showgirl. She likes characters and weird stuff. She does a lot of bloody, weird gore effects.

Rachael was born in Astoria, Oregon and moved around a lot, living in Alaska and then Hawaii, returning to Portland in her early teens. Around age 12 or 13, in the mid-1990s, she was a self-described “little street kid.” She observed that the Portland street scene has changed significantly since then, and she can’t imagine being a 12-year-old on the street today; it’s far more dangerous today. She does credit being a street kid with giving her good survival skills with which to navigate life. Around age 18, she started working in call centers and as a nude model on the Internet, doing a lot of pinup work and work in tattoo magazines. She performed in punk rock bands and enjoyed being on stage. That led her to working in strip clubs as a dancer.

Rachael didn’t do a lot of formal schooling but passed the GED placement test. She’s continued her education as an adult with classes and workshops. For her Burlesque training, she attended the All That Glitters School of Burlesque in Portland and attended BurlyCon, the educational conference in Seattle. Rachael gives credit to the local strippers in Portland as being inspirational to her. She especially notes as inspirational the performer Elvira. She began her dancing career working in bars around age 21. Working as a go-go dancer in the Sinferno Cabaret exposed her to the more extravagant shows and costumes in the Burlesque world. When she was hired as the Mistress of the Evening, she needed to create new acts to open and close the show.

Rachael explained that she wears a rhinestoned eyepatch because of the cancer tumor the size of her fist living behind her eye. She describes the surgery and reconstruction process, and that it will probably be a reoccurring thing for the rest of her life. She describes the difficulty with having face surgery as someone who earns their living needing to look good as a performer and bartender. She gives credit to a loving life partner and the Burlesque community for their support during this difficult time. She tells about the fundraisers that Burlesque people do to raise money for charities. She describes how she donates money earned from Burlesque performance to the OHSU cancer treatment center.

Rachael explains that her process for creating a new piece of Burlesque is somewhat stressful and torturous, as she is a perfectionist about costuming and the theatrical presentation. She usually finds her creative spark in a song or sometimes she starts with the costume and develops the act from there. Usually her process for choreography is a little more improvisational, but she is working currently on developing the arc of choreography more fully before stepping on stage. Rachael details the application process and logistics in traveling to perform for festivals and out-of-town shows.

Rachael explores the topic of cultural appropriation through the lens of costuming, stating that performers and designers really must do research before they make costume choices. She is proud that this topic comes up constantly in the Burlesque world. In terms of diversity in Burlesque, Rachael likes seeing applications being opened for marginalized groups before they open for the general population.

In response to the topic of respectability-politics, Rachael explains her frustrations with who is allowed to be nude and who is not, and her frustration with society’s double standards around that. She cites the constraints of the regulation regarding social media, and how they make it difficult to market shows and performances.

Rachael talks about how Burlesque helped her after her miscarriage and postpartum depression. The Burlesque community was so supportive and she found herself in a much better headspace because of it. Rachael feels Burlesque helps change society, given the fundraising it does for different charities and events. She wishes the general public knew about that generosity from the Burlesque community, and she wishes the general public knew how much work and effort goes in to producing a piece of Burlesque theater.