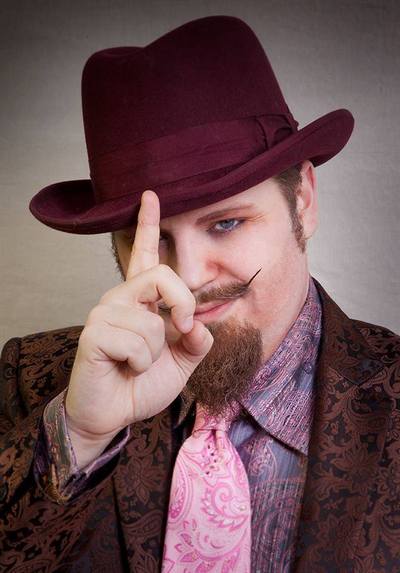 The Mad Marquis introduces himself as a Burlesque and cabaret producer, an emcee and performer in Portland Oregon. He says his name is an alliterative play on words and that he thinks of himself primarily as an entertainer. He defines Burlesque as striptease artistry or performative striptease.

In explaining the difference between Burlesque and stripping in clubs, he credits the strip club, Mary’s Club, with challenging the Oregon’s blue laws. For example, in Portland, exotic dancers can be completely nude while in other parts of the country they still have restrictions on the amount of skin that can be shown. In many parts of the country, there are no all-nude strip clubs. He further explains the difference between club stripping and Burlesque as stripping in a club being more of a customer service job or a sales job.

The Mad Marquis describes a typical work week juggling all the details, marketing and logistics in producing events and booking performers. He talks about partnering with other producers to bring out-of-town performers to Portland and about acting as his own stage manager in the shows where he is also performing as emcee. He explains that his weekly show, The Jack London Review, has a unique relationship with its venue, which is advantageous in garnering new audience members. He mentions that he used to travel to perform in Burlesque and cabaret shows, but now is busy in Portland.

As a producer, The Mad Marquis goes to other people’s shows to scout for new acts that he would like to hire for his events. His main criteria is that they be entertaining for the audience. In discussing his process for creating a new piece of Burlesque to perform, he explains in detail how a group act based on Buffy the Vampire Slayer came into being.

In turning to the topic of cultural appropriation, the Mad Marquis simply states that, as a producer, you just don’t put acts onstage that you would have to defend later on. He gives an example of a white-presenting dance trio who were doing an act with costumes that referenced the costuming of famous African-American dancer Josephine Baker. As a producer, he had a conversation with them. He noted that attitudes around cultural appropriation have certainly developed in the last 10 years. Additionally, he feels awareness on this topic is higher on the West Coast of the United States. He feels it is certainly higher in the United States than it is in Europe, citing an unfortunate racial incident in France a couple years ago. He goes on to explore that it might be considered questionable that he, as a White person hosting a cabaret show in a jazz club, might be considered culturally appropriation; Jazz music having originated in Black communities. He notes that Portland is a very White town and so the performance community is also very White. He feels it’s important to make sure that Performers Of Color see people like themselves on his stage, because otherwise they may assume that he doesn’t want People Of Color on his stage.

In terms of Burlesque being empowering, the Mad Marquis talks about how the act of taking off one’s clothes in front of people could be empowering. This often applies to People Of Color, or a non-binary performer, or a disabled performer. He explains that it can be empowering simply being sexy in public as a part of a group that is not traditionally seen as sexy in the dominant culture.

The Mad Marquis sees Burlesque as a force for social change primarily because it’s a chance to present ideas to get audiences thinking. There are Burlesque acts that are social and political commentary. But he wonders how much social change can happen, given that most people in the audience are there by choice anyway, so they may already be open to any controversial ideas presented onstage.

The Mad Marquis discusses challenges to making art in capitalism, such as: growing an audience, making sure people are paid, and the entire business component of making art. He would like to see people producing shows in new and different venues in Portland. He acknowledges that being a dancer is simply hard on your body. When he started performing Burlesque in 2011, there was a struggle for legitimacy for this art performance art form. He thinks that is less true today, due to the popularity of Burlesque shows, cabaret shows, and even television shows like RuPaul’s Drag Race. Even so, he feels that the greatest challenge is developing new audiences so that there can be growth in this field. Moreover, while Burlesque is fairly well received in Portland, the Mad Marquis wishes it were better received in other parts of the world.