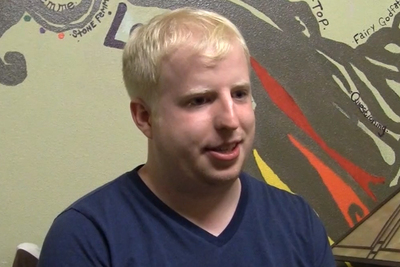 Wall begins this interview by discussing his time serving as co-director for Rainbow Continuum, delving into the issues the organization faced that year with a lack of gender diversity in the leadership and the non-inclusive decision-making that can stem from that situation. Wall talks about the different leadership positions available within Rainbow Continuum at that time, noting that there was a higher than normal rate of student engagement within the organization that year. In addition, Wall briefly discusses his mentor at the Pride Center and the important impact mentorship can have—a topic he returns to later in the interview.

Wall then details what a typical Rainbow Continuum meeting entailed while he was working there, including a facilitated introduction, and establishing a “safe” or brave space. Wall explains that what would follow was sometimes discussion questions centered on community issues or larger LGBTQ+ issues, and often an activity or game, led by the social director. Wall describes his experience with planning OSU’s Pride Week, including general highlights, again noting that the number of people involved and the number of programs put on was record-breaking that year.

Following this, Wall briefly discusses how Rainbow Continuum came to be designated as a voluntary student organization, and the ways that this designation ensured a standard of student autonomy. Wall notes that in his experience, OSU’s administration, faculty, and staff have been supportive of student voices on campus, and seem to always be looking for student input.

This conversation brings him back to the importance of mentorship, support, and role models—specifically highlighting the work Jeff Kenney did to improve the Pride Center as Director of Outreach, and how he helped them restructure the center to better fit the expectations of a cultural center. Wall ends by speaking on the importance of having a Pride Center on campus, and how the visibility and resources it provides impacted him in his early days at Oregon State.