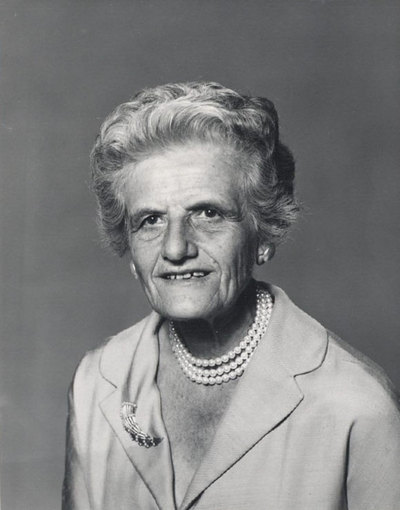 Gertrude Tank was born in Stuttgart, Germany on July 31, 1892. She attended college in Germany and majored in home economics before training to become a nurse at the Babies Hospital in Munich. In 1913, Tank moved to the United States with aspirations to attend the University of Pennsylvania for dentistry, only to find out that they did not accept female students. She instead enrolled at Temple University in Philadelphia and later moved back to Germany where she maintained a private dentistry practice for four years. Tank returned to the United States in 1926, acquired citizenship, and opened her own dental clinic in Philadelphia which she ran for twenty-seven years, focusing primarily on children’s dental care. Tank’s clinic was later moved into a nearby hospital, an environment she did not believe to be suitable for her profession and patients, so she left and accepted an offer to work at Oregon State College.

While at Oregon State, Tank was the only dentist working in the Department of Food and Nutrition within the School of Home Economics. She focused her research on the effects of trace elements fluoride, selenium and vanadium on cavities. Tank was also an avid mountain climber and hiked the Austrian Alps, Swiss Alps, Colorado Rockies, Canadian Rockies and Mt. Fujiyama. Though she retired in 1965, she continued to stay active in the OSU Nutrition Research Institute as a charter member. Tank was also a member of the American Association for the Advancement of Science, the Association of Oregon State University Retired Persons and the American Association of University Professors. In 1971, she testified at a state hearing in support of statewide fluoridation of drinking water.

Gertrude Tank passed away in Corvallis in October of 1984.