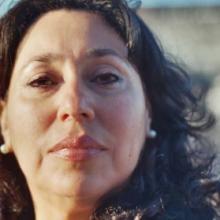 Lucía Robelo was born and raised in Managua, the capital of Nicaragua. She was the youngest of seven children, born to her mother Margarita Pereira Centeno, and her father Baltazar Robelo Abaunza. Her grandmother, Margarita Centeno, also lived with Lucia and her family. Lucía’s oldest brother died when she was less than two years old, shot accidentally by a drunk military man at a cultural celebration. Her father fell ill with heart disease and passed away when Lucía was only three years old. This left her mother as a widower of six children.

Lucía grew up during the Somoza Dynasty, which was a chain of fascist governments that lasted from the 1940s to the late 1980s, when the Frente Sandinista came to power in Nicaragua. Censorship, police brutality, and government and elite corruption were commonplace during the Somoza years; people were often killed for speaking truthfully.

Lucía attended Colegio Francés from kindergarten to high school. On December 23, 1972 Lucia and her family lost their home to the Managua Earthquake. Although their property was insured, the government stole much of this money through fees, leaving the family with only enough to afford a much smaller home on the outskirts of Managua.

Because of the turbulent times, Lucía’s mother sent her to live in Honduras with her sister. Lucía lived there from 1977-1979, studying Biology at the National Autonomous University of Honduras in Tegucigalpa. They then moved to Auburn, Alabama, where Lucia worked with a colleague, ethnographer and computer scientist Cherri Pancake, on Spanish publications. Lucía’s daughter, Melissa Judith Robelo was born in April 1980; she is now married with two children of her own.

Lucía moved to Corvallis, Oregon in 1992, in part because of her connection with Cherri Pancake, who was on faculty at OSU. When her Spanish publications work ended, she enrolled as a student at Oregon State. Lucia graduated with her M.A. in Spanish Literature, Spanish Culture, and Adult Education in 2007. Her professors subsequently recommended that she apply to become a Spanish instructor at OSU, and she has done so ever since.