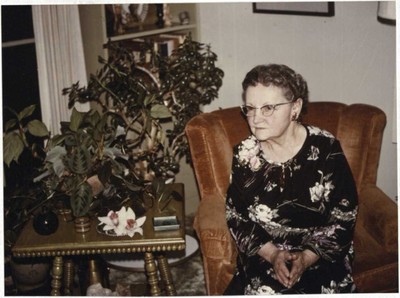 Mabel Pernot was born on December 9, 1900 in Corvallis, Oregon. Her family moved to Portland for a short period of time in 1910, but they soon returned to Corvallis where Pernot spent the rest of her life. Pernot’s family had significant ties to the Corvallis area and to the campus community – her father was OAC’s first bacteriologist and also the first photographer on campus. After Pernot graduated from high school, she worked as an assistant to an optometrist in Portland. She came back to Corvallis in 1925 to help her grandmother and though she considered enrolling at the college, she ultimately decided against going back to school.

Instead, Pernot became an apprentice at a beauty shop and later opened her own salon where she specialized in manicures and facials. She sold the business in 1936 after being seriously injured in a car accident and volunteered with the American Red Cross until the Second World War ended. Though Pernot never married, she had two fiancés, both of whom died as a result of military service.

After a period working as a clerk in a hardware and gifts store, Pernot was approached for a job by the head of the Department of Clothing, Textiles and Related Arts in the Oregon State College School of Home Economics. She subsequently became the manager of the Clothing and Textiles Stockroom, a small store that sold materials to Home Economics students in Milam Hall. She took a few summer classes at OSU to get settled into her new job as manager, a position she held until her retirement in 1965. During her retirement, Pernot enjoyed activities such as reading and fishing.

Mabel Pernot lived in a rest home in Corvallis during her last several years before passing on November 27, 1991.