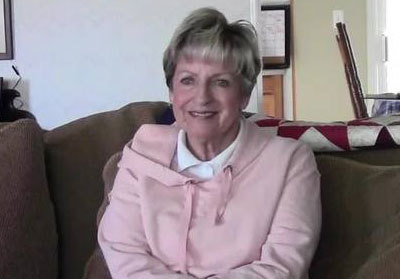 Judith "Teddy" (McMahon) Johnnie was born in 1939 in Portland, Oregon. She, her twin sister and her older brother were raised by their single mother. Her mother’s independence strongly influenced Johnnie’s desires to receive a higher education and start her own career rather than depend on a man for financial security. Her mother was the very first woman appraiser at Multnomah County which was not the easiest career path to take at the time. She took an exam to become an appraiser and received the top score. However, the county was hesitant about having a female appraiser, so she had to wait years before they would allow her to work. Even when she was given the job title, she was tested in ways that her male coworkers were not.

Growing up, Johnnie participated in many activities with her twin sister. For example, she was involved in choir in grade school and was part of the rally squad throughout high school. While in high school, her mother advised her and her sister to begin thinking about their future careers. Johnnie then decided to take all the secretarial courses her high school offered and soon had a clear picture of what she wanted to do with her future before she even entered college. This made Oregon State University (previously known as Oregon State College) an easy choice because it was known as the best business school near her.

Johnnie always knew that she would attend college because it was an expectation set by her mother. Johnnie’s family is unique with their long history of women attending college. Her mother and grandmother both graduated from Willamette University in Salem, Oregon, so Johnnie planned to go to a college that wasn’t too far afield.  Johnnie and her sister moved to Corvallis and began their education at Oregon State College in 1957. College was an exciting time for Johnnie  because she realized she had access to several new opportunities she did not have when in high school. She focused on absorbing as much knowledge as possible and continued to take secretarial courses for her future career. As a student, she majored in Secretarial Sciences with a minor in Home Economics.

On campus, Johnnie worked twenty hours a week at the Memorial Union to help pay for school. She became  very busy but still managed to attend as many social and sporting events as she could. She remembered how important sports were on campus and how attending the games were essentially expected amongst students. She was also part of the Pi Beta Phi sorority with her sister and she recollects that her involvement in Greek life was one of the highlights of her college experience. She remembers the support and laughs her sorority sisters provided and looks back on this time fondly. Johnnie felt as though she was treated equally to her male counterparts at Oregon State College. Although the courses she took were female-dominated, she doesn’t recall any moments of feeling like she was being treated unfairly or inferior to her male colleagues.  She also doesn’t feel as though marriage was a center of focus for her close female friends. Although they all expected they would probably get married in the future, they focused on getting their careers started first.

After Johnnie’s two years at Oregon State College, she married a man she had been dating and gave birth to two children shortly after. Johnnie  then worked as a church secretary in Redmond, Oregon for over forty years.