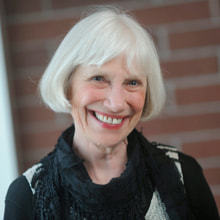 Marie Harvey was born in Vancouver, Washington. When she was about four years old, she and her family moved to rural northeast Oregon between Mitchell and Fossil. She grew up on a 25,000-acre ranch that consisted mainly alfalfa, sagebrush, and cattle. The family later moved to the Willamette Valley where they grew vegetables and operated a truck farm. Harvey credits her experience of growing up on a ranch with three sisters as influencing her perspective on gender roles in society.

Harvey attended the University of Puget Sound for her undergraduate studies, majoring in European History and minoring in Psychology. College represented a coming-of-age period during which Harvey rebelled against sexist rules and helped female students sneak in past curfew.

After graduating, she moved to Los Angeles where she was employed as a social worker for the LA County Department of Social Services. This experience was an eye-opener for Harvey as she worked with women facing poverty and unintended pregnancies. Later, she worked for the California State University, Fullerton Student Health Center as their contraceptive and problem pregnancy counselor. Her work in reproductive health would later influence her research interests.

Harvey was encouraged by the director of the student health center at Cal State Fullerton to study public health as it focuses on prevention and access to health care and resources. She received her master’s and doctorate degrees in public health from the University of California, Los Angeles.

Harvey then returned to Oregon, where she joined the faculty ranks at the University of Oregon. After having established herself in Eugene, Harvey took on a part-time position at Oregon State University to help build its Department of Public Health. She was then asked to make the transition to full-time work at OSU as department chair, and was tasked with building the first accredited school of public health in Oregon, an accomplishment that was finalized in 2014.

Today, Marie Harvey is an OSU Distinguished Professor of Public Health and the Associate Dean for Research in the College of Public Health and Human Sciences at Oregon State University. Her research focuses on unintended pregnancy, sexual behavior, abortion, and the impacts of health policy on reproductive care.