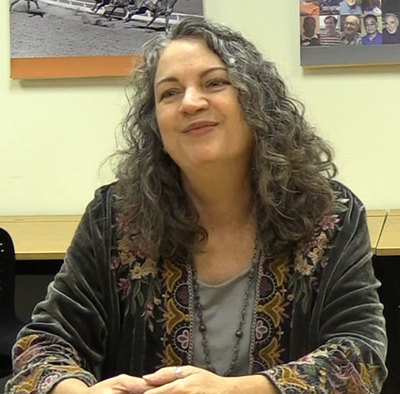 Dawn Figueroa grew up on the East Coast and graduated from Kean University in 1990 with a double major in Fine Arts and Religion and Philosophy. From there, she found work as a teacher’s aide at the Oakwood School, and as a museum curator at The Art Gallery in New Jersey.

While moving with her husband to Colorado, Missouri, and New York, she continued her passion for the fine arts as a freelance artist, working out of bead shops and framing shops along the way. While living in upstate New York she worked from home and sold her work at a farmer's market.

After realizing that she wanted "to help people," she contacted managers at the Picker Art Gallery at Colgate University and found work as a museum assistant. During this time, Figueroa learned how to catalog museum objects using an in-house database. She also began to ask for more opportunities when she saw them, allowing her to advance her skills as a curator.

Following their stint in New York, Dawn's husband Robert landed a new teaching position at the University of North Texas (UNT), and Dawn began working as a collection manager and curator for their Fashion Collection in 2008. During this time, Figueroa created exhibitions as well as published materials including Traditions Old and New, an exhibit catalog for UNT's Fashion Collection.

From Texas, Figueroa and her family decided to move one more time, to Corvallis, Oregon, in 2014. While touring the Oregon State University campus that spring, Dawn stumbled upon Milam Hall and a display for OSU's Historic and Cultural Textile and Apparel Collection. With her interest and experience in fashion collections and cataloging, she researched the collection online to see if there were any improvements to be made to their cataloging.

After finding a small online presence, Figueroa wrote a proposal that outlined ideas for improve the digital aspects of the collection. She now works as the collection's curator, creating displays, cataloging the collection and digitizing its components for online access. Within this position she has also worked with the Asian and Pacific Cultural Center, given lectures to design students, and run several workshops. Figueroa also collaborated with students and The Nines, a hotel in the former Meier and Frank Building in downtown Portland, to recreate vintage Meier and Frank window displays.