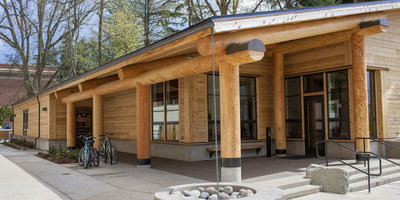 The Native American Longhouse on the campus of Oregon State University

Although there are now nine federally recognized tribal groups in Oregon, the geographic area was inhabited dozens of tribal communities, some of which banded together, by choice or by force, as part of larger confederated tribes. During the early 1970s, American Indian / Alaska Native OSU students advocated for a center to call their own, and the Native American Longhouse was established in 1973.  The Native voices represented in these interviews are members of OSU’s student community, who are members of a variety of tribal communities, both within and beyond the state of Oregon.