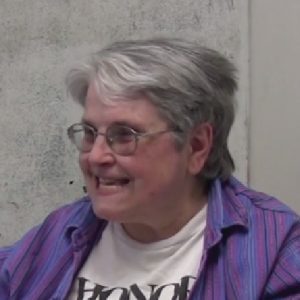 In the interview, Marlene Massey begins by describing her early life growing up in a middle-class New Jersey suburb with two siblings—a younger brother and sister. During this first portion of the interview, Massey touches on the highly visible pushback against sex education in New Jersey schools, and the complete lack of discussion surrounding “alternative sexualities” which occurred during her youth. Massey explains how she came to realize her sexuality through a crush on a female gym teacher, and by getting in trouble for being too close or “too much of a sister” to her fellow Girl Scouts in high school. Massey describes how neither she nor her lover Barb in high school identified as lesbians or used the term, they would sneak out of their houses at night to see one another. Massey moved to Oregon in the 1980s with a woman she had, funny enough, met at her Girl Scout camp.

Following a discussion of her youth, Massey describes an incident which occurred while she was teaching preschool in Oregon. She describes how the assistant director of the school attributed a student’s problems to their lesbian mother, and Massey disagreed. A year later, that same assistant director cut Massey’s hours, but no one else’s. When no one at the school came to her defense, Massey left to find another job, and says she decided not to pursue a legal case based on advice from a friend. Massey discusses why she joined the Benton County LGBT organization After 8, describing herself as not political but motivated by a desire to live a normal life with her partner. Her involvement with After 8 included doing the decorations for the Harvey Milk dinner, picking up trash for a sponsored highway section, and helping organize for the “Gay Games” event. Then Massey explains how her involvement with After 8 ended, when she was hospitalized for a rare brain injury, and discusses her experience with being hospitalized. Massey then explains how her involvement with After 8 planted the seeds for her current activism. Massey shares her views of the similarities and differences between advocating for disability justice and LGBTQ+ rights. Massey then discusses her work with the local public library and the Unitarian Church. Finally, she reflects upon changes she has seen in attitudes towards the LGBTQ+ community both locally and nationally. Interviewers: Angela Dunham, Jessica Osborn, and Pedro Arenas.