Marysville adopted as the town name on September 9.

Population in Corvallis: not reported; in Benton County: 814; in Oregon: 12,093 (13,294 when portion that became Washington Territory is included).

Oregon territorial legislature passed an act whereby a territorial university would be "located and established at Marysville." (The Oregon Territory extended from Canada to California and from the Pacific Ocean to the Rocky Mountains.)

Brick, lumber, and other material assembled and a kiln built for the purpose of erecting a university building where Ballard Extension Hall now stands (originally Snell Hall).

Town name changed to Corvallis, meaning the "heart of the valley," on December 20.

Site of the territorial university relocated from Corvallis to Jacksonville following legislative action on January 19 and 23. Material collected for the purpose of constructing university buildings ordered sold at public auction.

Corvallis Academy, the first community school in the area, established at 5th and Madison Streets. John Wesley Johnson, a graduate of Yale College, was the first teacher and principal. Johnson later became the University of Oregon's first president.

Town of Corvallis incorporated on January 28.

Classes met the first year in the Baptist Church with no religious affiliation. Instruction was coeducational at the primary and preparatory levels. (There would be no college-level curriculum until 1865.)

Construction of a two-story Corvallis College building (estimated cost $5,000) began on 5th Street between Madison and Monroe Streets. (The building was razed in 1899.)

Oregon became the 33rd state in the union on February 14. 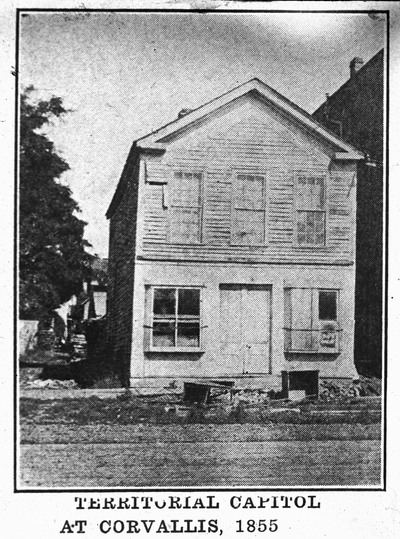 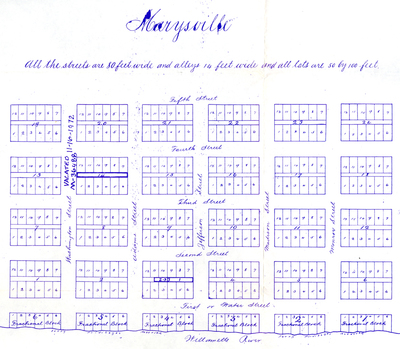 Detail from a reproduction of the original plat map for the town of Marysville, Oregon