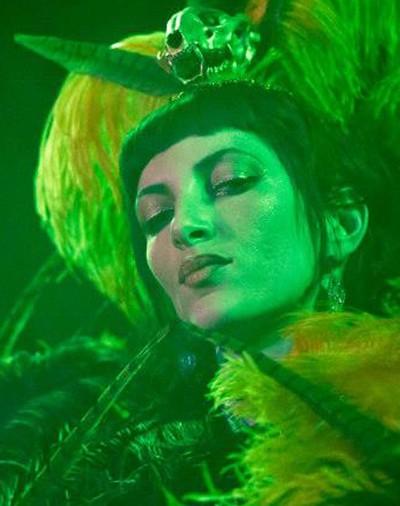 Hai Fleisch grew up in Northern California. While attending film school in San Francisco she saw The Velvet Hammer Burlesque, and fell in love with the wit, humor and costumes.  She began performing as part of Kiss Que C’est, a queer, gender-bending Burlesque troupe in 2006.

She moved to Portland, Oregon, in 2008, where she became involved in the burgeoning burlesque scene. Seeing a need for producers she co-founded Rose City Shimmy, a collective that produced their own shows and traveled the Pacific Northwest. She also performed in Black Lodge Burlesque: Cabaret inspired by the works of David Lynch, eventually Co-Producing the show for several years. She joined Sign of the Beast Burlesque for their first show in 2010, and co-produced the troupe from 2012-2020. In 2016 she co-founded the world’s first annual festival dedicated to Heavy Metal & Burlesque: Metalesque Fest.

She has a degree in Film & Theater, and works as a Fabric Artist & Fabricator. During her burlesque career she has made all of her own ensembles, as well as headdresses and costumes for many other performers. She has been featured in “It's All That Glitters: Portraits of Burlesque Performers in Their Homes,” Inked Magazine, and can be seen in the opening of the documentary, “Burlesque: Heart of the Glitter Tribe.”